The Best Neighbourhoods in Pickering, Ontario 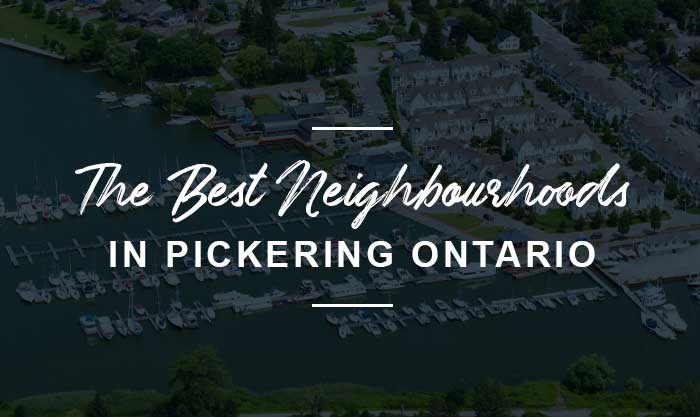 There are many reasons why buyers have gravitated towards the City of Pickering, Ontario as a potential option to put down roots and purchase their next home. One of the most obvious reasons is its ideal location near the City of Toronto.

For those who work in Toronto but wish to enjoy a quieter, calmer lifestyle, Pickering checks that box - and so much more!

From the beautiful shores of Lake Ontario to some of the most well kept urban parks, Pickering is an obvious choice for those who wish to escape the noise and settle into suburbia.

Pickering, Ontario is full of neighborhoods that boast family-friendly streets, close proximity to nature and forestry as well as necessary amenities. Here is a glimpse at some of the best neighbourhoods to call home in Pickering! 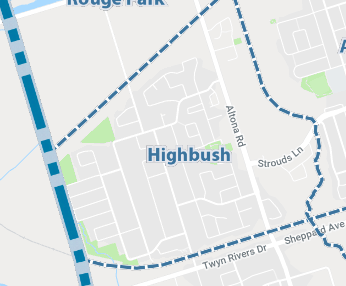 One of Pickering's oldest areas, Highbush is a well established area that is surrounded on all four sides by a natural heritage system.  Located in central-west Pickering, Highbush is bound by the City of Toronto border along its west side, making for ideal travelling for commuters.

Homes located in the Highbush neighbourhood of Pickering are mainly single family dwellings with a few townhome developments mixed on Pinegrove Avenue and Sparrow Circle.

Initial residential development began in Highbush between the early 1900’s and 1940 with significant growth happening between the 80’s and 90’s.

Residents of Highbush enjoy spacious lots and well maintained properties. The average price of real estate for homes for sale in Highbush, Pickering are approximately $710,000. Prices range between high $500,000’s for Highbush townhomes to well over $1 million dollars for single family dwellings.

Schools in the Highbush neighbourhood are:

Highbush is a nature lovers dream! Surrounded by the protected natural heritage system, Rouge National Urban Park, residents of Highbush have access to over 80 square kilometers of forestry, trails and scenery.

To the eastern portion of the neighbourhood, the Altona Forest offers over 102 acres of protected forest that includes trails, boardwalks, scenic look outs and marsh lands.

During the winter months, residents head to Finch Pond which routinely hosts pick up ice hockey games and family skating.

Along with surrounding natural settings, Highbush also features 3 neighborhood parks. Pinegrove Park, Woodview Tot Lot and Valley View Park, which is home to the only seasonal outdoor synthetic rink, are all located within Highbush.

The neighbourhood of Highbush is set 8 kilometers from the downtown Pickering area.

View all homes for sale in Highbush, Pickering > > > 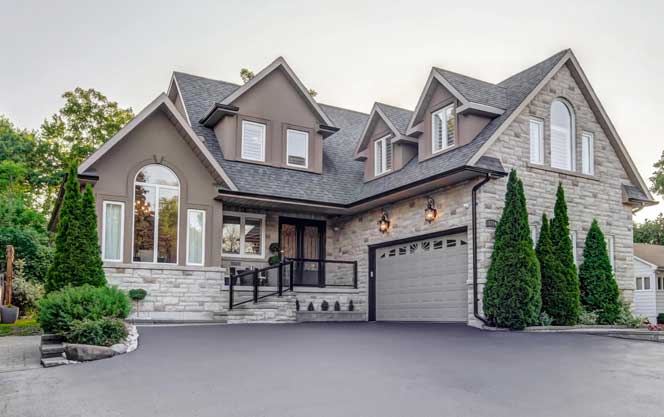 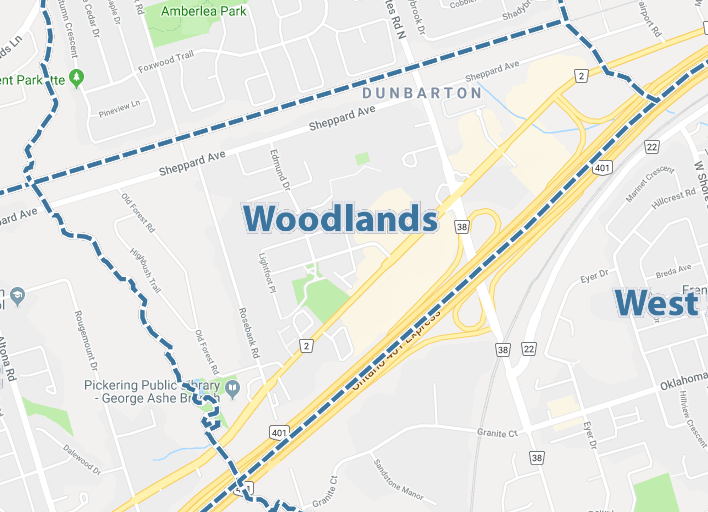 Woodlands is one of Pickering's smallest neighbourhoods taking up just 1.49 square kilometers. It is bounded by Petticoat Creek to the west, Canadian Rail to the north, Amberlea watercourse to the east and Ontario Highway 401 to the south.

Woodlands consists of mainly single family, detached dwellings with the south east section of the neighbourhood having a handful of townhome developments.

Woodlands is one of Pickering's oldest neighbourhoods, with residential development of the area beginning in the early 1900’s. During the 1980’s, Woodland saw further development east of Rosebank Road. The neighbourhood has been mostly developed, however, there remains a few infill lots dotted throughout.

With the age of the neighbourhood, residents of Woodlands enjoy large, spacious lots with mature tree-lined streets.

The average price for homes for sale in Woodlands is approximately $672,000.

Schools in the Woodlands neighbourhood are:

Woodlands has a great mix of natural parks and forestry and necessary amenities. Residents of Woodlands enjoy visiting the many trails, parks and more that the neighbourhood offers.

Along with the west side of Woodlands is a portion of the city’s natural heritage system, The South Petticoat Ravine which is full of flora and fauna and heavy forestry.

To the south of Woodlands the Petticoat Creek Conservation area can be accessed along with the beautiful and scenic Waterfront Trail system.

Woodlands has two community parks within the neighbourhood. The Ernie L. Stroud Park, which is the area's main park, features over 500 species of plants, a large playground for children and a unique bench which was carved from a 90 year old fallen ash tree.

Kingston Road, which runs through Woodlands, features a number of shopping centres such as the Steeple Hill Shopping area and Rosebank Plaza. These areas offer access to restaurants, banks, medical centres and more.

Woodlands is also home to a sparkling community pool and the George Ashe Branch of the Pickering Public Library System.

View all homes for sale in Woodlands, Pickering > > > 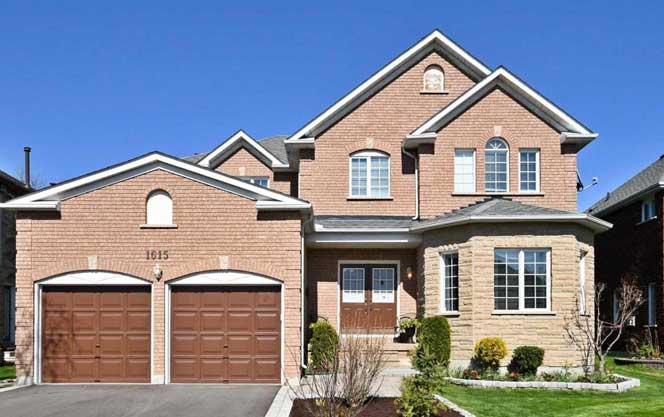 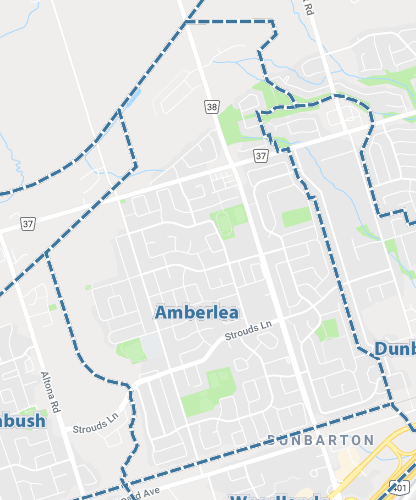 The Amberlea neighbourhood of Pickering, Ontario is bounded to the west by the Altona Forest, to the north by the Canadian Pacific rail line, the east by the Pine Creek valley and to the south by Canadian National rail line.

Amberlea offers a large number of parks and trails, making it a great location for those who love the great outdoors.

Amberlea was originally developed by Bramlea Consolidated Developments Limited with the first homes being built in 1975. The rest of the housing stock available in Amberlea went up between the 1970’s and 1980’s.

The majority of real estate available in the Amberlea neighbourhood is single family detached and semi-detached properties.

The average price for homes for sale in the Amberlea area of Pickering is roughly $820,000.

Schools in the Amberlea neighbourhood are:

Amberlea is bounded by the west by the Altona Forest which offers residents a chance to meander through the well-maintained trails and take in the beauty of nature.

The neighbourhood is home to 10 parks which feature a large number of amenities such as tennis courts, baseball diamonds, playgrounds, multi use sports fields, a butterfly garden and a splash pad. The parks within the Amberlea neighbourhood are:

Along with the large amount of parks and greenspace available to residents of Amberlea, the neighbourhood also features some shopping and retail options. Amberlea Plaza and the Rosetail Plaza offer specialty shops, restaurants, grocery stores, medical offices and variety stores.

Amberlea is ideally located to downtown Pickering, set just 4.6 kilometers to the west.

View all homes for sale in Amberlea, Pickering > > > 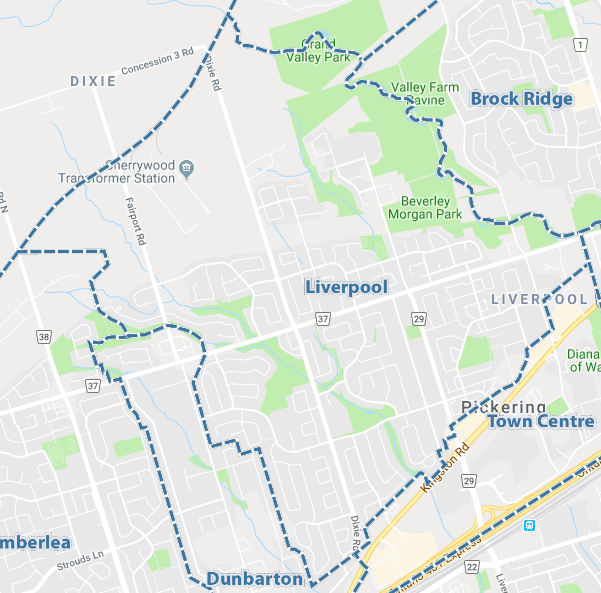 Centrally located within the city of Pickering is the beautiful neighbourhood of Liverpool. Close to many of the city's main attractions along with a number of parks and greenspace, Liverpool is a great place to set down some roots or raise a family.

Liverpool is Pickering's largest neighbourhood and bounded to the north by the Canadian Pacific rail line, the west by Fairport and Appleview Road, south by the 401 and Kingston Road and east by the West Duffins Creek.

The neighbourhood of Liverpool is made up mainly of detached and semi-detached houses with some townhouse development availability found within the eastern sections.

Most of Liverpool’s residential development was accomplished during the 1970’s.

Townhomes for sale in the Liverpool neighbourhood can be found starting in the mid to high $400’s with single family properties starting in the high $600’s and climbing past the $1 million dollar mark.

Schools in the Liverpool neighbourhood are:

Due to the size of the Liverpool neighbourhood, residents have access to many of the city's amenities.

The Pickering Town Center is within Liverpool and offers a large number and variety of shopping, retail and dining options. There is also a newly constructed, pedestrian only bridge connecting the Town Center to the Pickering Go train station.

Liverpool is home to the main branch of the Pickering Public Library system as well as the Pickering Civic Complex and Rec Center which has a state of the art fitness center, 2 ice pads and a public pool.

Liverpool Road leads way to Millenium Square and Beachfront Park. Enjoy summertime fun and entertainment while taking in the sights and the sounds of Lake Ontario.

The neighbourhood of Liverpool has ample opportunity for children to get out and play as it features 7 parks. The parks within Liverpool are:

The Liverpool neighbourhood is centrally located and encompasses a good portion of the downtown area.

View all homes for sale in Liverpool, Pickering > > > 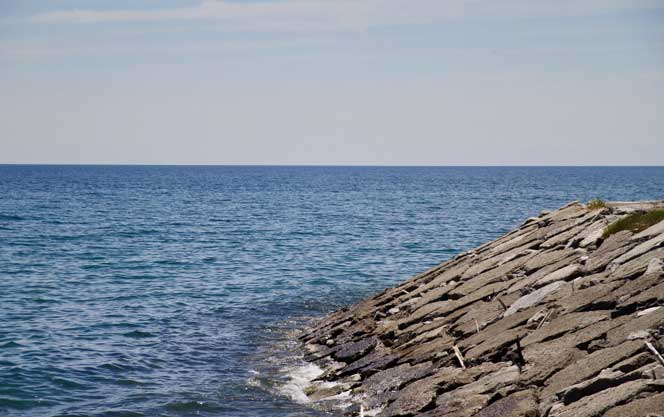 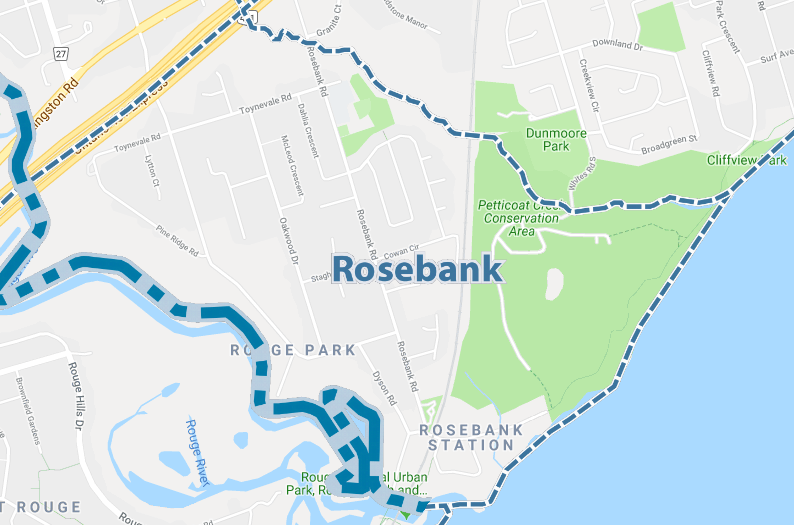 Another one of Pickering's older neighbourhoods, Rosebank is bound to the west by the Rouge River, north by the 401, east by Petticoat Creek and south by the beautiful shores of Lake Ontario.

Residents of Rosebank enjoy so much of the natural beauty that meanders throughout the city of Pickering. The Petticoat Creek Conservation Area, Waterfront Trail and Rouge National Park create a perfect backdrop for all areas of the neighbourhood.

Early housing in the Pickering neighbourhood of Rosebank dates back to the early 1900’s with additional substantial development happening in the 1970’s.

The average price for homes for sale in the neighbourhood Rosebank is approximately $1.6 million.

Schools in the Rosebank neighbourhood are:

Like many neighbourhoods within Pickering, there is ample opportunity for residents to enjoy the abundance of green space and forestry. The Petticoat Creek Conservation Area is filled with ideal picnic areas, scenic lookouts and also features an impressive 17,000 square foot public pool.

A portion of the Rouge National Urban Park is within the Rosebank boundaries and offers access to trails, waterways, historic sites and more.

Though there are no shopping centres directly within Rosebank, the nearby Pickering Town Center features a wide variety of retail, service and dining options.

Rosebank is located along the western side of Pickering and residents can find themselves in the downtown portion of the city in roughly 10 minutes.

View all homes for sale in Rosebank, Pickering > > >

Whichever neighbourhood you are interested in or decide to call home, the city of Pickering offers so much to see and do. With their extensive access to natural forests, trails, parks and the shores of Lake Ontario along with the lists of services and amenities available, Pickering is a city full of great neighbourhood options!